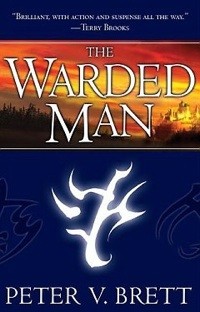 It’s not everyday you hear of a best-selling novel being written almost entirely on a QWERTY-toting Windows Mobile smartphone.

While the rest of the commuting public was likely sleeping, listening to music, tooling around on Facebook or just plain hating the subway commute, NYC author Peter Brett used his spare commuting-time to work on his book.  And, after two years of “thumbing” 400 words of text on each leg of his commute, Brett’s novel, “The Warded Man,” has reached best-selling status in the UK and Poland.

Peter Brett’s recently-published novel started out as snippets of text on his smartphone. He started taking notes on his trusty Windows Mobile-powered HP iPaq smartphone, and eventually got fast enough to tap out almost 1,000 words per day.

On days when I could get a seat, I would put my iPod on to drown out the background chatter and start thumb-writing. I set a goal of 1,000 words a day for myself, and usually I could get at least 800 of those done on the commute. More if I wrote at lunch. At night, I would go home, sync the phone to my PC, and then clean up the file, fix typos, and finish off the quota (if needed).

The phone really changed my life, because it meant I could write anywhere, at any time. In a long line at the bank? Write. Waiting at the bar for a friend? Write. In a cab, or the passenger seat of a car? Write.

In the end, Brett ended up writing his 400-page, 100,000-word novel almost entirely on his smartphone – a testament to the smartphone’s original purpose as an any-time productivity tool.

It really doesn't get any better than this. O2 is now offering lucky Brits a chance at buying the HTC...