JD Power, and their mysterious associates, has just released their 2009 Consumer Smartphone Satisfaction Survey results. The winner? Apple and their iPhone/iPhone 3G. No contest, game over, thanks for playing.

The iPhone recently topped JD Power’s 2008 Business Wireless Smartphone Customer Satisfaction Study, so it doesn’t surprise us that Apple took top-billing again, thanks to the iPhone. To be fair, the Apple ranked tops (5/5 starts) in all consumer satisfaction categories expect in “Battery Aspects,” where the iPhone scored a dismal 2/5 stars. But, in all other categories, Apple bested every other smartphone maker by a large margin.

LG was the next-best smartphone maker with consistent 4/5 star-ratings in all smartphone categories except “Operating System,” where it scored a 3/5. The rest of the smartphone-pack – Palm, Motorola, HTC, Samsung and RIM (BlackBerry) – held down the middle-road with mostly 3-star ratings. 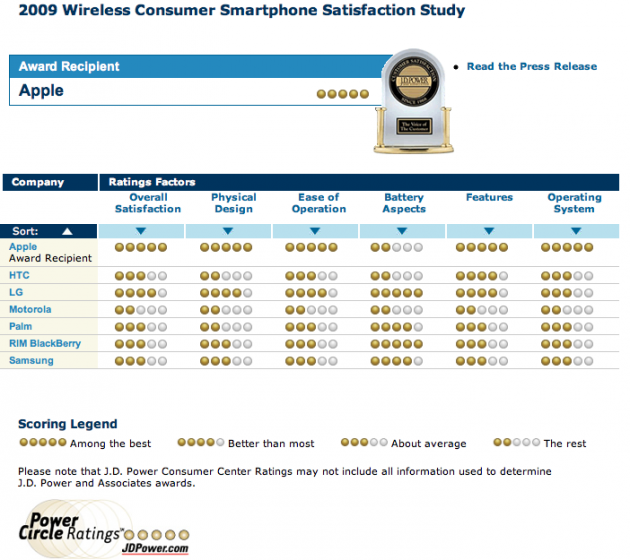 The only category where Apple and the iPhone didn’t manage a perfect score was battery life, and we’re not arguing. If we can go more than a full day of moderate data-use without draining our iPhone 3G completely, it’s a good day. If battery life is more important than, say Overall Satisfaction, Ease of Use, Design, or Operating System, then LG and RIM have your number. Both LG and RIM scored 5/5 stars for battery life.

In the end, Apple scored 791 overall points, out of a possible 1,000 points. Runner-up LG scored 779 points, making it the second-best smartphone maker in consumers’ eyes. Samsung scored third-place with 759 points.

So, the iPhone is the top consumer-pick across the board. That is, unless battery life is a big thing for you. As if we needed a survey to tell us that…

The Sidekick LX (2009) is T-Mobile's first HipTop offering to boast full 3G data connectivity. With a 3.2-megapixel camera (with...