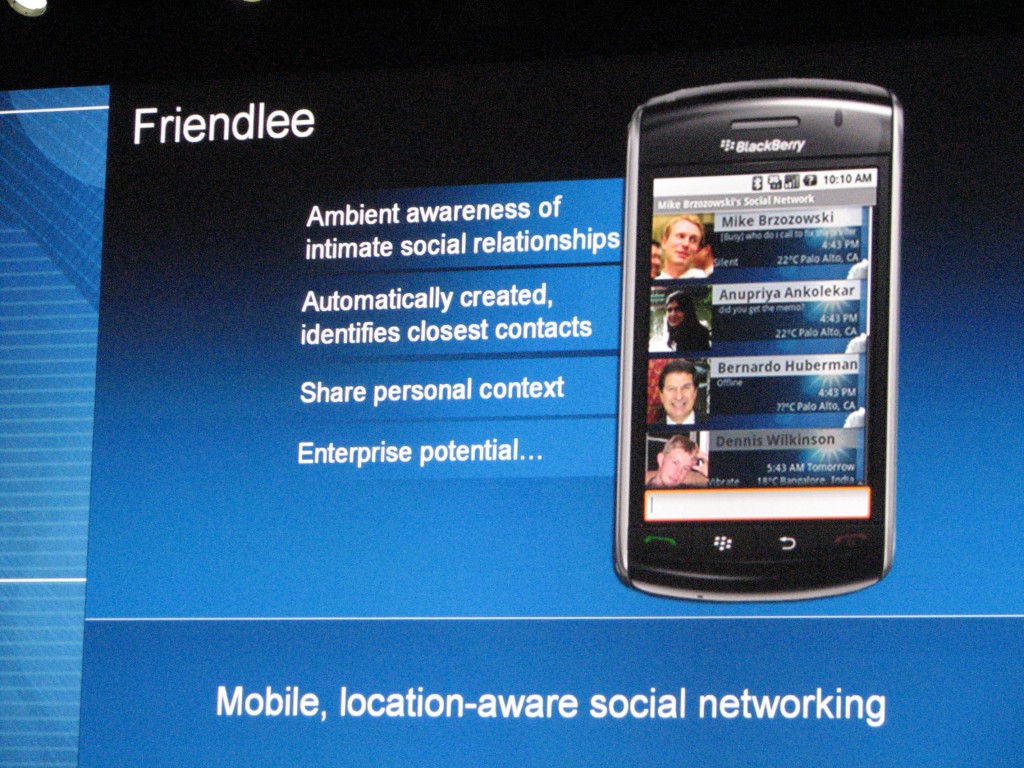 HP had already made two official announcements at WES (CloudPrint and Operations Manager), but they also offered a sneak peek of what they’re working on next at yesterday’s keynote. Details were slim, but the long and short of their new app, Friendlee for BlackBerry, is that it lets you get in touch with your closest contacts, know what their status is, and where they are.

By detecting who you interact with most frequently, Friendlee automatically populates your friends list. Simple twitter-style status messages means you can keep up on specifics; some of the examples they have here include “who do I call to fix the printer”, and “did you get the memo” shows HP is clearly gearing this towards enterprise. Profile awareness will also let you know what mode your contacts’ BlackBerry is in – no more taking it personally when they don’t answer your call, since you can see they just have it set to Silent. Knowing your contacts’ local time is also huge for international corporations who need to plan their correspondences carefully across time zones.

Friendlee also sports a kind of LinkedIn style of connections; you can browse through select contacts of your close contacts, enabling otherwise awkward second-degree links, and also a business reccomendation engine. You might remember your friend mentioning a great pizza place around the block, and by perusing his Friendlee profile, you could get further information on it.

It doesn’t look too far along, since they didn’t do much other than copy and paste an Android screenshot onto a Storm, but they were confident enough to show it at the biggest BlackBerry show of the year, so I’m sure it’s on the way. In the long run, HP is trying to reimagine the address book so instead of chewing through a list of rarely-used contacts, you’ll be focusing on the few people you talk to on a daily basis. Take a look at HP’s research on the app for a closer look.

Looks like I let this one slip through my fingers a bit... But hey, better a few hours late than...