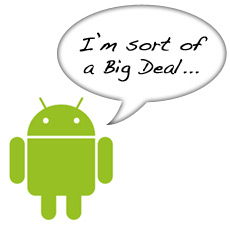 I’ve said it before and I’ll say it again… It’s going to be a big year for Android. Now I’ve even got some outside testimonies and research from the analysts at Strategy Analytics.

The folks over there have commented that Android’s licensing model and ‘semi-open-source’ structure plays well in today’s tough economic climate. They also site increased carrier, developer and vendor support to be a huge factor in Android’s growth over the next few years. In fact, they noted that Android could very well ‘be a top-tier player in smartphones over the next two to three years’.

To wrap everything up nicely, Tom Kang, Senior Analyst at Strategy Analytics noted:

“We forecast global Android smartphone shipments to grow an impressive 900 percent annually during 2009. The Android mobile operating system from Google gained early traction in the United States in the second half of 2008 and it is gradually spreading its presence into Europe and Asia during 2009. Android is expanding from a low base and it is consequently outgrowing the iPhone OS from Apple, which we estimate will grow at a relatively lower 79 percent annually in 2009.”

That’s a pretty grand statement if you ask me. Expect big things for Android this year.

Any amateur astronomers out there? If there are, you may want to pick up a G1 or next-gen Android device...