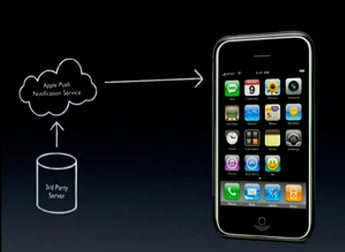 Apple is now rumored to be considering some limited multi-tasking support for iPhone 3.0 OS. According to Business Insider, Apple may allow iPhone users to select two iPhone apps that will be allowed to persist in the background (multi-task). Alternatively, Apple may approve certain third-party iPhone apps for multi-task support on the iPhone. Whatever the case, any kind of multi-task support in iPhone 3.0 would be a boon for iPhone users.

Apple’s official answer to the multi-tasking problem is the delayed background push notification system that will go live with iPhone OS 3.0. Rather than having third-party iPhone applications continuously running in the background to keep abreast of the latest information, Apple wants to push all that data as “notifications” to inactive iPhone apps. The push notification system would save on battery drain, but will still be a multi-tasking compromise.

As great as push notifications might be, without true multi-tasking support, the iPhone will always be a compromise. But, there’s talk of the next iPhone sporting an upgraded 512MB of RAM – which would open the door to true multi-tasking support on the new iPhone. With quadruple the current iPhone’s RAM stores, the new iPhone should make easy work of running multiple third-party iPhone apps in the background. The only question is – will Apple allow it?

There used to be a time when the ancient art of "walking and talking" on your cellphone was as revered...