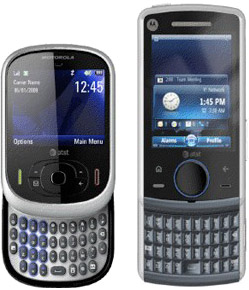 AT&T seems gearing towards launching a slew of new devices. Among them, we spotted two fairly cool Moto handsets that could certainly help the struggling American company.

The first one is called Heron and we’ve already talked about it as the Motorola Iron Man. The Android-powered smartphone sports a slide-down QWERTY keyboard a la Palm Pre, 2.8-inch QVGA touchscreen, 3 megapixel camera with flash, a-GPS, 3G radio (HSPA), and a memory expansion slot. It should be available starting from November 2nd.

As for the other Moto device, it’s called Sawgrass and it’s a similarly-shaped feature phone, boasting the similar slide-down QWERTY keyboard. Specs sheet also unveils 2 megapixel camera, 3G, 2.5-inch QVGA screen, a-GPS, instant messaging software, and so on. The problem, however, is that the page we got from Engadget says the Sawgrass should’ve been released on April 13th. Since that hasn’t happened, we’re thinking AT&T either killed the device or moved the launch date for later in the year. We’ll see…

With Apple expected to unveil their latest iPhone offering(s) at WWDC 2009, the iPhone rumors are coming hard and fast....