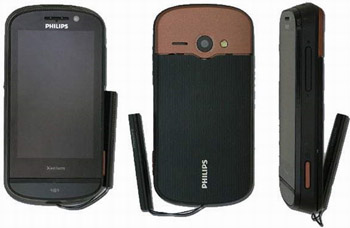 Philips has unveiled a new member to its Xenium line-up called X830. Similarly to with what we’ve seen with other phones from the electronics giant’s series, we guess this one also comes with great battery life.

Again, we’re talking about the device you probably won’t see for sale outside of China, some other Asian countries and perhaps Eastern Europe. Therefore, it lacks 3G radio, and the EDGE data is the best you’ll get. However, there’s WiFi on board, meaning you can still get decent Internet speeds while in a hotspot.

Rest of the specs include 5 megapixel camera with auto-focus and flash, 240×400 pixels touchscreen, Bluetooth, FM radio with RDS, media player, 47MB of internal memory that is further expandable with microSD cards. Size wise, the Xenium X830 measures 105x53x15.5 mm and has a weight of 120 grams.

The HTC Touch Diamond hit the scene last year with hard-hitting features that led the smartphone pack at the time....