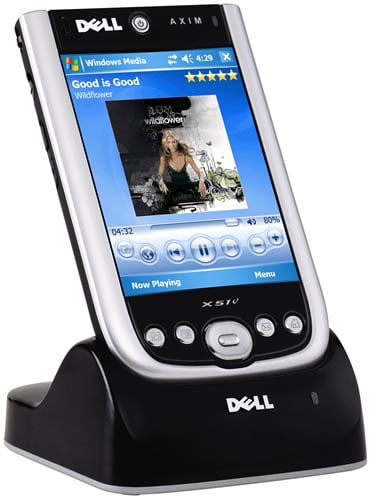 Take a look at the top 5 PC vendors today:

These numbers come from IDC who says that in the first quarter of this year: 63.5 million computers shipped. HP has the iPaq, Acer purchased E-TEN in March 2008, Lenovo makes devices in China and Toshiba already makes Windows Mobile smartphones. Dell is the only top 5 PC manufacturer to not have a mobile unit. Dell has the knowledge; once upon a time they had a product line known as the Axim. These devices were not smartphones since they didn’t have any cellular radios inside, but they ran Pocket PC, which is now called Windows Mobile. Their last model was the X51 (pictured above) and the flagship version had a 3.7 inch VGA display with 16 million colors, VGA out with a special cabled, 802.11b (WiFi), Bluetooth 1.2 and IR. Impressive for when it shipped in September 2005.

The Wall Street Journal is reporting that Dell is looking to buy someone. They have $9 billion in their cash reserves and recently sold another $1 billion in bonds. They even hired someone from IBM’s mergers and acquisitions department. Sadly people who have spoken to Dell’s Chief Financial Officer, Brian Gladden, are saying that the company plans to “expand its data-storage and tech-services businesses.”

Palm has a market cap of $1.8 billion right now, and you figure they want to sell the company for close to twice that, so you’re looking at around $3.5 billion. Dell can do it, but will they is another matter all together. For reference: Seagate, who makes hard drives, has a market cap of $4.7 billion and Western Digital, who does the same thing, is worth $5.61 billion.

The benefits are clear to both parties. Dell can bundle smartphones with the shipment of new laptops. The relationships Palm has with operators could be used to start selling 3G enabled netbooks. Dell can give Palm the money they need to keep making awesome products. Palm can build a smartbook running webOS (Foleo II) and have Dell sell it all over the world. Dell could get some of the designers over from Palm to make their computers that look less ugly. Palm could teach Dell a thing or two about marketing, not to mention to fact that the new CEO of Palm saved Apple with the iMac and also worked on the iPod!

The likelihood of this happening is slim to none and I don’t even know why I’m writing this when I could be outside throwing a Frisbee around with my friends.

No Skype on the Palm Pre… For Now.

Skype isn't coming to the Palm Pre anytime soon. This, according to a statement released by a Skype executive. It...