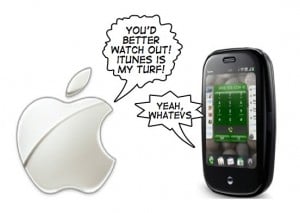 By now it’s no secret that Palm programmed the Palm Pre to trick iTunes into thinking the Pre is an iPod-like device, allowing it to easily sync with your iTunes media library. But, that obviously isn’t sitting too well with Apple’s higher-ups. To that end, Apple has posted a new support page that is presumably aimed directly at the Palm Pre.

The new support page could just be legal maneuvering to cover Apple’s ass when they decide to update iTunes and kill the Palm Pre’s compatibility with iTunes. Should some sort of “horrible software bug” start bricking Palm Pre that try to sync with future versions of iTunes, Apple might just be able to say “I told you so.”

US Senator puts Verizon, AT&T, others on blast for texting prices

Washington D.C. is looking more and more like a high school popularity contest where everyone dresses in expensive suits and...