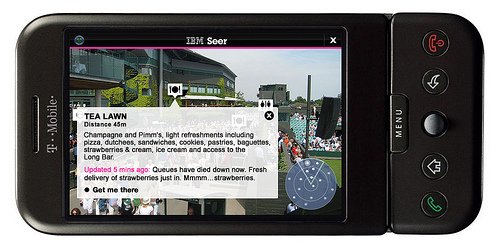 Layar was one pretty snazzy augmented reality app for Android we’ve seen recently, but IBM is working on another called Seer. As you can see from the demo video, it’s more or less the same kind of thing: an image generated from the phone’s camera is overlaid with contextual information based on GPS coordinates and facing. Filters like “restaurants” or “bars” can shave down what’s being shown. They’ve got some cool twitter integration so any tags you pull up can show the latest geotagged tweet from the event. Live event information like match schedules will also be included on the tag. If you happen to be into tennis and attending Wimbledon, you can pick up Seer here once the event begins next week.

Video after the jump!