Remember the Palm Pre? The other super-hyped smartphone from Palm? The one that launched a couple weeks ago? Fine, well, there’s this WebOS-powered smartphone from Palm. It’s called the Palm Pre and it’s supposed to be the company’s make-or-break handset – the one that will hopefully save the pioneer of the smartphone age from a quite imminent demise. It’s an awesome piece of kit that could very well rescue Palm from doom. But they need it to be a smash hit. 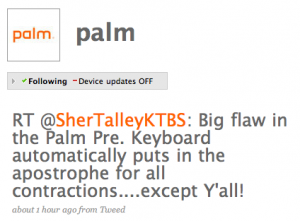 So, it’s a little puzzling (albeit, very commendable) that Palm itself has tweeted about a Palm Pre flaw. It seems the Palm Pre’s keyboard will automatically insert apostrophes in all contractions. All contractions except “y’all,” apparently.

Puzzling, because it points out a flaw in a device that Palm really needs to be a success. Still, Palm should be commended for owning up to any bugs – as long as Palm fixes them quickly.

Speaking of which, it’s probably safe to assume that Palm is already working on a fix and will have it issued through over-the-air (OTA) updates. Thanks for the heads-up, Palm!