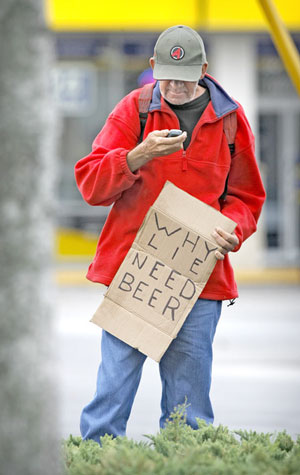 He really needs a beer, cellphone and a home - in that order.

If there was ever a time and a place to be down on your luck, Colorado may soon be it. Pre-paid wireless carrier TracFone Wireless has proposed a plan that would make Colorado the 17th state in the US to offer free cellphones and cellular service to low income residents. The Public Utilities Commission is considering the plan, which would provide 83 minutes of wireless minutes and a low-end Motorola handset to those in need.

TracFone’s “Safelink Wireless” subsidy plan would be funded by the Universal Service Fund – a federal fund which subsidized $800 million worth of low-income phone service throughout the US last year. Colorado, for example, was given $3.2 million in subsidies to help low-income residents secure phone service last year. The Universal Service Fund is funded by taxes on telephone lines, so the money for the Safelink Wireless program is already in place.

In order to be eligible for a free mobile phone (a $50 Motorola handset) and wireless service, subscribers must be drawing aid from one of Colorado’s six welfare funds. That is, once the plan is approved.

Free cellphones for the poor might sound like an unfair deal, but in this day and age where a cellphone is as important for emergency communications as it is for finding a job, government money might be better spent on wireless subscriptions than wireline telephone service. That, and maybe a decent suit for a job interview. One step at a time.

While the wide-world of cycling isn't exactly included in our mobile-related beat, I figure HTC's Tour de France cycling team...