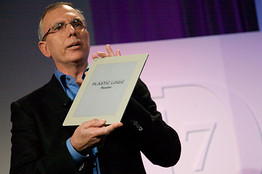 American operator AT&T will be providing the built in connectivity for the Plastic Logic eBook reader that will be offered by Barnes & Noble in early 2010 said The Wall Street Journal. “There’s a lot of analysts and industry experts that believe this space has tremendous potential.” said Glenn Lurie, Head of Emerging Devices at AT&T. The details of the negotiations have not been disclosed. This device, and bundled service, is clearly a direct response to Amazon’s Kindle which has service built in courtesy of Sprint. Before re-joining IntoMobile in mid June, I published an article at analyst firm Vision Mobile that goes into great length about why the “connectivity built in” space has the potential to become larger than today’s mobile industry and rewrite the antiquated business models that consumers have been struggling to understand for years. I highly recommend you check it out to get a better idea of where we’re going to be in a few years. A lot of the devices you’re going to buy will have data built in.

There used to be a time when satellite phones came attached to briefcases (much like the first cellphones, in fact)....