In a bit of good news for the likes of Clearwire and its controlling parent-company Sprint, Juniper Research has released a new study that projects annual mobile WiMAX revenues of $15 billion by 2014. The revenue would ride in on the back of some 50 million expected mobile WiMAX subscribers by 2014. Mobile WiMAX is expected to replace DSL and satellite internet services. Especially so in rural areas where DSL lines aren’t yet installed.

It still remains to be seen how WiMAX will fare in the face of LTE networks from wireless carriers around the world. Clearwire has yet to light up its WiMAX networks in more than a handful of early markets, and Verizon is ramping up to launch LTE as early as the first quarter of 2010. 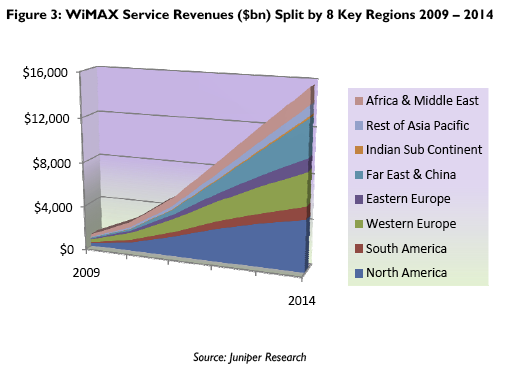