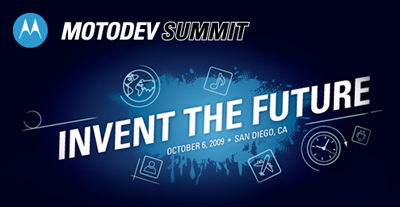 Motorola needs to kick start things when it comes to Android… and kick start ’em in a big way. That’s why it comes as no surprise to me that a ‘MotoDev Summit’ has been announced by the company. Commencing October 6th in San Diego, the MotoDev Summit will be a showcase allowing developers to check out the resources available for Moto’s upcoming lineup of phones… including their Android-powered bad boys. Did I hear a Morrison out in the crowd?

Developers attending the event will have a choice of more than 20 sessions to attend. Registration opens August 12, for all of you eager beavers out there. For all the details you can head over to developer.motorola.com.

Should be an interesting event. Good on Motorola for pro-actively pursuing/recruiting developers here. Seems to me that if your device isn’t supported by a large developer community… what’s the point!? Stay tuned for more on the MotoDev Summit as details become available.

Layar Reality Browser 2.0 is in the AppStore!

Remember Layar, the company which showcased its offering at Mobile 2.0 Europe in Barcelona? Well, they've just launched the updated...