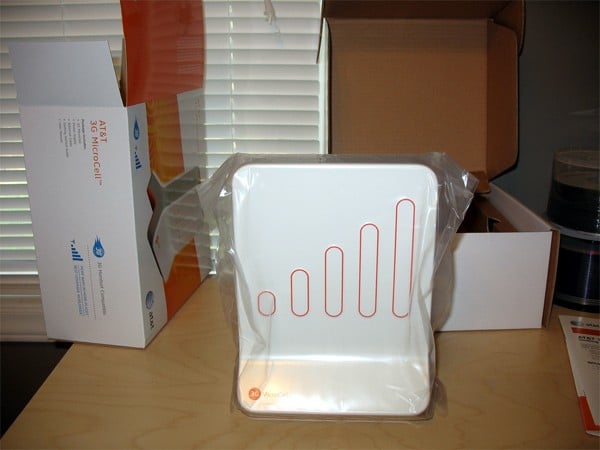 AT&T’s 3G Microcell is now officially ready to put the smack down on wireless dead spots in AT&T’s 3G network. The 3G Microcell basically crams a miniature cellular tower into its cable modem-sized package, giving signal-seekers full strength reception for both voice and data services. If you live or work in a building that stops AT&T’s signal at the door, the 3G Microcell should help you put an end reception woes. But, only if you’re in Charlotte, N.C.

The 3G Microcell femtocell (read more on femtocells here) hooks up to a broadband internet connectino and can handle simultaneous voice and 3G data communications – a feature its two main competitors Sprint and Verizon can’t claim with their respective femtocells. That means you’ll not only get to make five-bar-strong voice calls in your home, you’ll be able to surf AT&T’s 3G network at full speed. The 3G Microcell is a subscription-free device, so the only cost to AT&T customers is the initial $150 purchase price.

But that’s still a hard pill to swallow. AT&T is essentially asking customers in dead spots to pay out of their own pockets for access to the network. Building cellular base stations around the US costs money – a lot of money. The AT&T 3G Microcell basically allows AT&T to fill in the gaps in their network one building at a time, and at the customer’s expense.

This is how a femtocell works

On the other hand, it’s almost impossible to expect any wireless carrier to completely blanket the US with a seamless network. The femtocell is a compromise, but at least it’s a compromise that delivers on its promise. In fact, femtocells from Verizon and Sprint have been selling well despite higher price points and lesser features. And, T-Mobile has been successful with its WiFi-based HotSpot @Home UMA service.

For now, AT&T has launched their 3G Microcell in Charlotte. It’s not clear when other markets will be added, but a previous report pinned the nationwide roll-out on early Q4 2009. Those North Carolinians lucky enough to have an AT&T dead spot at home can get their hands on the 3G Microcell for $150.

Star6 rocks out in Berlin!

You might remember I've written about Star6 before - it's a performance music app for the iPhone and iPod Touch...