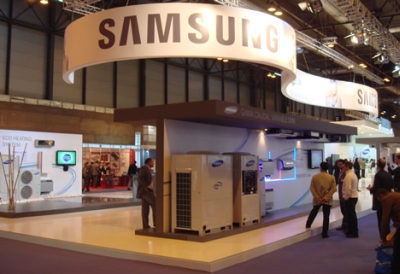 At the sixth annual Samsung Mobile Solutions Forum in Taiwan, the South Korean company introduced various bits of hardware that will be coming to a mobile phone near you some time during the next decade. First we have two new processors, the S5PC110 and S5PV210, both use the ARM Cortex A8 running at 1 GHz, both are built on a 45 nanometer process, both support 30 frame per second 1080p video playback and recording via HDMI 1.3, the only difference is the S5PC110 is meant for smartphones while the S5PV210 is meant for netbooks. More in this press release.

Next up we have the S5K4EA, a 5 megapixel system on chip camera sensor. Using pixels 1.4 microns large, you’ll be able to get not only 5 megapixel images, but 1080p video at 30 frames per second as well in a module that is only 8.5 mm x 8.5 mm x 6 mm large. Mass production of this sucker is expected to start in Q1 of 2010. Press release here.

Finally we have two new forms of memory. A 64 megabyte PRAM (phase change random access memory) memory that retains what is stored in RAM even when power loss occurs will be hitting the streets really soon. This is the first type of system memory to be built on PRAM technology and it can mean ridiculously fast start up and shut down time, not to mention huge increases in power efficiency. Press release here. Samsung is also releasing 128 megabyte memory module of the old fashioned type of system memory, running at 166 MHz this stuff can pump out data at 1.3 gigabytes per second, a full 20% faster than the old model. More about that here.

One more thing … Samsung has released the first ever capacitive display driver integrated circuit with built in control functions. This is handy because less chips = less space = more room to put chips that do other awesome stuff or more room for a larger battery. More on that here.

If you haven’t figured it out by now, Samsung not only makes mobile phones, but a lot of the components that go into making a mobile phone. Today we’ve seen them release processors, memory, screen controls, and you know they also make batteries and displays. About the only thing Samsung doesn’t make themselves is radios. Pretty cool when you think about it.

You might recall seeing the pico-projecting LG Monaco popping up on an extensive AT&T roadmap back in the Spring, featuring...