Samsung issued a press release today about their groovy AMOLED displays. Their contrast is great, the darks are darker, the colors pop out, and power consumption goes down, but viewing angles in outdoor conditions go straight to hell when compared to transflective LCD displays. Anyway, back to the juicy bit of the press release, the Samsung Moment:

The Samsung Moment integrates the open and innovative Android platform with Google complete with built-in Google mobile services, including Google Search, Google Maps, Gmail and YouTube as well as the thousands of applications built on the Android platform. The Moment is the first Sprint device to include a brilliant 3.2-inch AMOLED touchscreen display and is designed with a tactile QWERTY keyboard that slides out horizontally and a virtual QWERTY keypad for versatile text messaging and email access. Device navigation is simple thanks to an optical joystick located just below the expansive display. Powered by an 800 Mhz processor, the Samsung Moment is one of the fastest available in the market and features WiFi capability, integrated GPS navigation, 3.2 megapixel camera and camcorder and stereo Bluetooth® technology.

No pictures, no release dates, no pricing, but hey, it’s something that the guy who hit send on the press release is going to get in deep trouble over. We like trouble.

Beginning Nov. 1, customers can purchase Samsung Moment through all Sprint channels including Web, Telesales (1-800-SPRINT1) and our national retail partners. Retail pricing will be $179.99 (excluding taxes) after a $50 instant savings and a $100 mail-in-rebate with a two-year service agreement. Pre-registration for this phone begins today at www.sprint.com/moment. 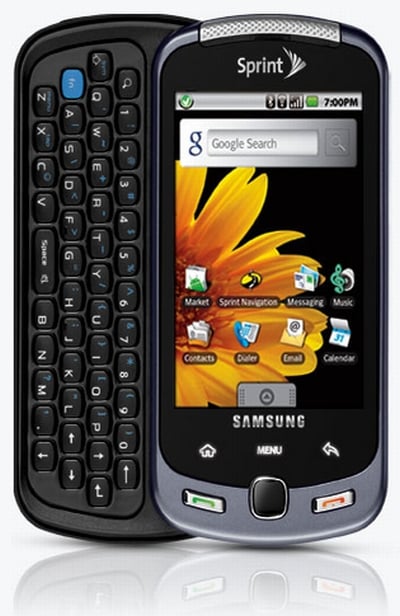