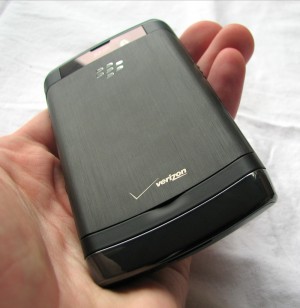 The BlackBerry Storm is significantly better built than its predecessor. The thing that strikes you first about the Storm2 if you’re upgrading from the original is that the display doesn’t move around nearly as much within the phone’s frame; it feels tight and solid, while still giving SurePress enough room to do its clicking thang. The brushed steel battery door still feels great like the original, only the double-latch mechanism has been skipped in favour of a simple prying divot near the bottom, much like the BlackBerry 8520. Those latches were always hit and miss, anyway. The phone feels heavy and solid, and combined with the buttons locked away under rubber skins, I’m really confident about the Storm2 being able to take a few licks. Sizewise, it’s pretty much identical to the original.

The Storm2’s new look, though borrowing the basic key layout from its grandaddy, is significantly sleeker and adds a shallow bezel to the top and bottom back edges. Just to bring the 8520 back into the discussion, another similarity is the flush front screen that includes all four of the soft keys, winning the Storm2 major style points. Functionally, the keys are exactly the same, but it looks great having those keys built right into the screen.  Aside from the aforementioned similarities with the Curve 8520, the Storm2 is clearly paving the way for the next Bold as well – just take a look at some of the leaked pictures, and you’ll see the generational resemblance in the siding and side keys, which will presumably find their way to the 9100 Striker whenever RIM decides to bring the Pearl up to date. Back to the Storm2, the lock key on top has been replaced with an on/off key; it still locks the device with a single tap, but also turns it off if you hold the key down. Personally, I still prefer the original Bold’s layout when it comes to locking, since the topside key is just way too easy to accidentally press, but it seems like every device since the original Storm has gone the new way.