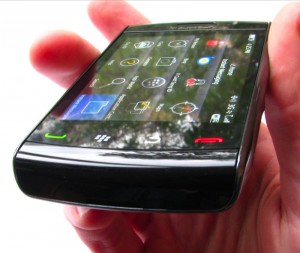 OS 5.0 brings a significant amount of improvements and changes over the latest and greatest, 4.7, and I’m finding new ones pretty much every time I pick up the Storm2. There’s nothing what you’d call mind-blowing, but a lot of little, important things. For example, locking the screen when you’re on a phone call – not genius, but definitely something the first Storm was missing. Another long-waited feature is threaded SMS, including emoticon support.  The new Files application (previously tucked away under Media->Menu->Explore) is a great way to work your way through the BlackBerry’s directory system. One of the most interesting preloads on Verizon’s version of the Storm2 is a Bing app, which, as far as I know, is its first proper appearance on mobile. I’m still a diehard Googler, but having Bing right there is definitely enough to get me to give it a shot. VZ’s visual voicemail is also available on the Storm2, if you’re used to enjoying it on the 9530, and a City ID app that lets you know which area you’re recieving/sending calls from.

Some of the more noticeable changes will be in terms of the user interface. Kinetic scrolling (menus and pages still move a bit after you’re not touching the screen), elasticity (menus and pages bouncing back after your push them beyond their extremity), and transitions (short animations when switching, opening, or closing applications) all add up to make the overall experience really enjoyable. The menus have also been pruned a bit, with options like “Send/Share…” and “Set As…” launching a popup of options, rather than each of those options previously having an individual entry in the menu. Presumably apps would be able to plug into either of those lists without cluttering the native menu. The original Storm did a fair bit for the BlackBerry software on the elegance front, and the Storm2 takes yet another solid step in turning the OS from a spartan trod, to a smooth-yet-functional ride.

There’s not much to say about call quality; it’s pretty standard, and the phone app doesn’t introduce any new tricks.

The 3.2 megapixel camera is roughly equivalent to the earlier Storm with one small software improvement – close-up autofocus. I wouldn’t go so far as to call this macro, but it’s a nice option for when you know you want to focus on something nearby, and not accidentally the background. The camera app remains well-rounded with the usual image stabilization, flash, geotagging, and white balance settings, but I’d still like to see a few more options, like cropping and changing the exposure.

Video playback is still somewhat hit and miss. Mobile YouTube is still moody about when it wants to stream, and watching videos from the microSD memory card is still very picky about the format it can read. The picture quality and size is absolutely great when you can get it to work, though – I recommend checking out RealPlayer for quick and easy mobile video optimization. 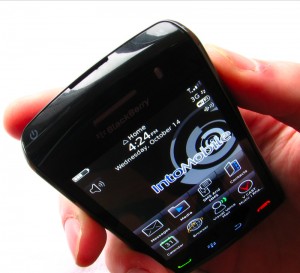 The success of RIM’s clicking touchscreen will make or break the Storm2. SurePress has seen a significant overhaul, and feels very, very different from its predecessor. There’s significantly less travel on the clicking mechanism now, which is entirely electronically based (some think it has something to do with piezoelectronics). Aside from just being totally unclickable when locked or turned off, the list of improvements also lists “optimized pressure for comfortable text entry”, and after trying out the keyboard, it does feel a little tighter when you have the virtual keyboard pulled up, so you have to press harder. I’m not sure I like that part, honestly, although it’s really cool that there are multiple applications of the technology. Conversely, I found in other situations, like when you’re looking through the icon home screen, it can be really easy to click, to the point where you inadvertedly open an app instead of just gliding over it. There’s still some fine tuning to be made on this particular feature.

There’s some additional help with prediction as you type – a tickertape of options pops up over your word if you stop typing for a second, which is handy, especially when you’re rocking the condensed SureType keyboard in portrait orientation. Multitouch is available for stuff like shift and alt keys, and the extra sensitivity means that you don’t have to wait for the touch portion to recognize the letter before committing to a click, like we did with the original. All of that being said, typing speed is up a couple of notches, but it’s still only a decent substitute to a real, honest-to-goodness keyboard, which plenty of others in the BlackBerryfamily offer. The compromise you have to make in typing for the sake of added screen real estate is shrinking, however, and I think by the time the Storm3 rolls around, it will be a nearly seamless difference.