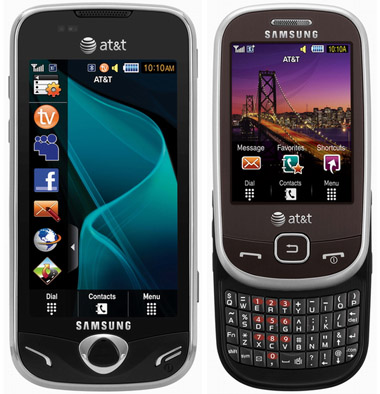 AT&T is adding two new touchscreen-equipped Samsung devices to its offering – Mythic and Flight, both which will be available on November 8th.

The first of the two, pictured on the left, comes with 3.3-inch display, 3.2-megapixel camera, Samsung’s well-known TouchWIZ UI, 3G, GPS, Bluetooth, and the ability to sing along AT&T Navigator, AT&T Mobile Music and AT&T Mobile TV services. The price is $199.99 on a contract after a $50 mail-in rebate.

As for the Samsung Flight, it’s a non-3G device that sports GPS, 2-megapixel camera, smaller touchscreen, and supports AT&T Navigator and AT&T Mobile Music services. This one’s obviously cheaper device, hence AT&T is asking $99, again on contract and after a rebate…

Android-powered Saygus VPhone V1 is at the FCC

I haven't heard about this phone (and manufacturer) before, but that doesn't mean it's a bad product. Quite the contrary,...