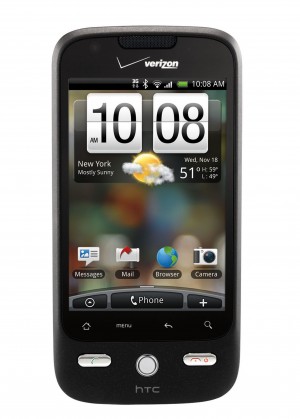 We’ve already had a chance to play with the HTC Droid Eris from Verizon Wireless, but there’s nothing like a retail package unboxing ceremony to really get up close and personal with a new handset. As the “ying” to the Motorola Droid’s “yang,” the HTC Droid Eris offers Verizon customers a fully capable Android smartphone at half the price of Moto’s headlining Droid, and it deserves some of our undivided attention.

Surprisingly, the HTC Droid Eris isn’t much thinner than the Motorola Droid, which sports a slide-out QWERTY keyboard. That’s not to say that the Droid Eris is a brick, it actually sits really comfortably in the hand. Still, the Eris could stand to lose a couple millimeters around its waist.

The Droid Eris’s 5-megapixel camera is faster and less laggy than the Motorola Droid. It also supports touch-focusing, which gives it a another small but significant leg-up on the Droid. The 3.2-inch display is smaller than would be ideal, but it’s plenty big for day-to-day use. Above all, there’s no sliding mechanism on the Droid Eris, so build quality is top-notch – no jiggling or creaking here.

The Droid Eris is available from Verizon Wireless for $99.99 with new 2-year contract. Or, you might be able to find a better deal here.

Anyway, acquaint yourself with the Droid Eris below!

AT&T's iPhone exclusivity deal, by most accounts, will come to an end in mid-2010. When that happens, iPhone fans hesitant...