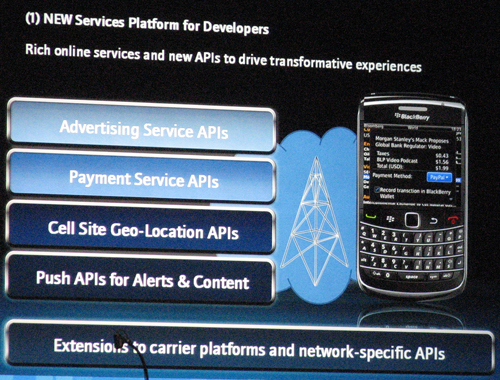 More goodies from the BlackBerry Developer Conference today: fresh location-detection options using cell site recognition, and push services for those who want to leverage RIM’s biggest advantage in mobile computing. First up, cell site recognition is a big one for location-based apps who want to keep battery drain down (GPS takes a significant toll). Anyone with 5.0 will automatically update the database of cell towers and their locations; a very cool use of crowdsourcing. There’s also new reverse geocoding that will tag specific coordinates with a proper street address – a nice addition that we’re already seeing in action in Google Maps for Mobile. On top of those two, RIM has introduced an API for estimated travel time within the U.S. and Canada; the time is generated based on aggregated traffic conditions and speed limits cross-referenced with distance. 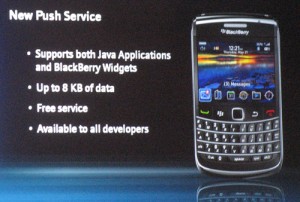 Good stuff all around, but push services are probably bigger news for most developers. Push Services will enable apps to pull down up to 8 KB of data with all of the righteous immediacy that makes BlackBerry e-mail oh-so-very awesome. It’ll be interesting to see how this service will fare once it’s out in the wild and what developers use it for (push Twitter, anyone?); Web Signals have been testing the waters for a little bit with Alliance Members, but we’ll have to wait to see how much apps can really do with 8 KB. An added bonus, for devs who thought they might have to pay for it, is that Push Services will be available for free.

Both the new geolocation and push services are available specifically in devices with OS 5.0 and up, and will be available in the first half of 2010. You can try out some of these new options in the beta 5 Java Development Environment that was just released today. For more information on the upcoming push service, check out RIM’s page.

One of the many announcements made at the BlackBerry Developer Conference is a new ad partner program that allows app...