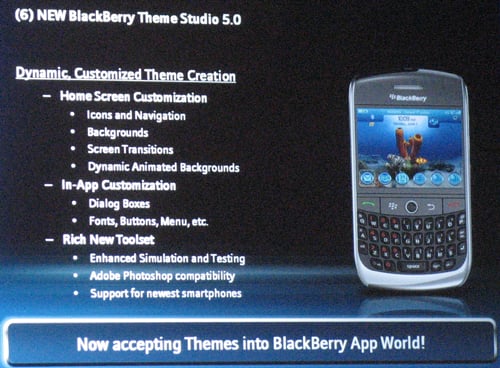 There’s no denying that the overall BlackBerry UI feels a bit old, but today at the BlackBerry Developer Conference, RIM took some big steps to freshen up. A new Theme Studio and will allow developers to really go to town, including options for screen transitions, animations, and all of the usual tools needed to put a theme together. The Studio includes a Theme Builder for the usual font, icon placement, dialog box colouring, etc., and a Composer to create animated graphics. Awhile back in OS 4.5, themes saw a pretty beefy upgrade, and this new tool will equally open up some doors. A bunch of Adobe tools plug right in as well, making it easy to import assets and even preview themes on a device proper attached via USB.

On top of the new theme tool, a new plug-in for Eclipse should make app developers lives easier by opening up a lot of user interface options. All you have to do is drag and drop elements you want (like a carousel, or picture viewer), and you’ll see them all on various BlackBerry devices, in full WYSIWYG glory.

For a closer look at the Theme Studio, you can get downloading over here, and the new GUI plug-in will be available mid-2010.

It's about time. At yesterday's keynote, RIM announced a LinkedIn application for BlackBerry, joining Facebook and MySpace as some of...