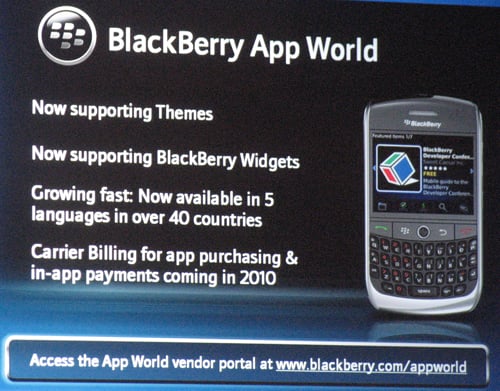 The BlackBerry App World got some love at the Developer Conference keynote, with the announced inclusion of web-based widgets and themes. We had heard themes were coming down the pipe, and the widget SDK has been out there for a little over a month, but combined with the show’s focus on the new theme builder tools and OS 5.0, the devs here should feel good about diving right in to these new kinds of App World content.

BlackBerry widgets have generated a lot of talk here at BBDC, but there’s still a lot of contention about the name; most people think of tiny desktop applications, or Android home screen items, and that’s really not what BlackBerry widgets are like at all. It’s probably better to think of them as RIM’s answer to webOS – it essentially opens up the platform to those who are interested or simply more comfortable coding in web languages like CSS, HTML and XML. The presence of widgets in App World is going to be seamless, since they won’t be functionally different than the standard Java applications folks normally load up onto a BlackBerry.

As for themes, the new tools should give theme developers a little bit of extra fighting juice in a new, unified, and potentially competitive theme market. The internal testing process will likely be a little different, but I’ve been told it will be just as robust as that for apps and the submitting will be just as open to everyone.

Finally, carrier billing is something folks have been asking for, since PayPal has been the sole payment option since App World’s launch in the spring. With carrier billing, folks would just end up seeing all App World purchases right on their monthly wireless bill. Working directly with credit and debit cards would be sweet in the long run, but this is a good step in the right direction. In-app transactions will provide an added revenue stream for developers, but end-users need options on the payment front too. It’ll be interesting to see which carriers sign on for this kind of billing, and how long it takes to roll out internationally.

If you’ve got either a theme or widget that you want to get into App World, you can get submitting right now. Carrier billing won’t be around until next year, though.

The folks at NewspaperDirect Inc. have launched 2 new versions of their very popular PressReader app. The new apps are...