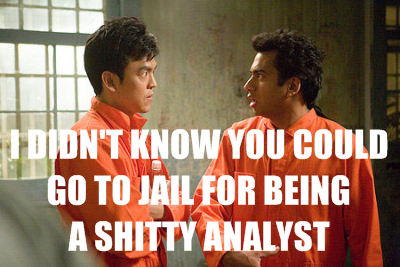 Ashok Kumar, an analyst with Northeast Securities, is now the butt of all my “people who work in this industry who have no clue what they’re talking about” jokes. This time last month he told The Street that Google will be releasing their own Android device, only to be burned a few days later by the head of Android Porject, Andy Rubin, who said “we’re not making hardware, we’re enabling others to build hardware”. Kumar now has new information, and I’m being a total idiot for linking to it, but here it goes:

At this point in time you may proceed to slap your forehead.

If Google ever released their own mobile device, which they’re not going to, they would be alienating handset makers.

If Google ever released their own mobile device with unlimited free calls, which they’re not going to, they would be alienating handset makers and operators.

Will there be a version of Android called Flan? Absolutely, Andy Rubin already talked about, and he confirmed it will support advanced 3D graphics.

Will there be an Android device, built by HTC, with a processor from Qualcomm that is nearly twice as fast as the iPhone 3GS? Yes. Just take the HTC HD2, which has a 1 GHz Qualcomm Snapdragon processor inside, compared to the 600 MHz processor inside the iPhone 3GS, slap the latest version of Android on it, and there is your mythical Google Phone.

What next Ashok Kumar? Are you going to tell people that the next version of Android, the one after Flan, will be called Gelato and it is going to power the new Google Phone? It’s going to be 4 times faster than the iPhone 3GS, has the ability to tell you where the nearest café serving a hot steaming cup of decaffeinated “shut the fuck up” is, and best of all adds the ability to purchase said cup of coffee with Google Checkout!

Taptu has grown up quite a lot since I last played with their service. In my September 2007 review I...