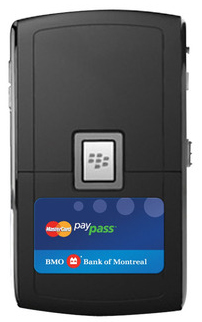 PayPass mobile contactless payments have been making the rounds in NYC, and even found their way north of the border through Bell recently, but have both been limited to NFC-enabled phones (namely the Nokia (NYSE: NOK) 6131). Luckily, MasterCard Canada is launching a new tag that you can slap on the back of your BlackBerry (NSDQ: RIMM) which enables you to pay for goods and services with a mere tap of the phone on a sensor. This four-month pilot project is likely based on Giesecke & Devrient sticker technology we saw earlier this month. While it might look like you’re just duct-taping a PayPass credit card to the back of your device, there’s a lot of wireless interference that would screw up a normal card – my guess is that this particular PayPass Mobile Tag has been insulated specifically for BlackBerry. One of the benefits of having NFC capabilities built right into the handset is that you could do more software-wise; I’m hoping there’s a BlackBerry app coupled with this tag that launches through a push notification whenever you tap to make a payment, maybe allowing you to enter a pin code to confirm a purchace. At very least, you get an e-mail with purchace details, so keeping tabs of receipts is way less of a hassle.

Anyway, interesting stuff all around – hopefully we’ll see it out of the pilot phase sooner than later.