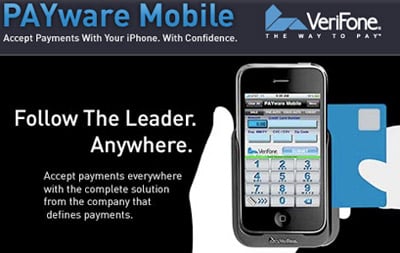 Two weeks ago, Stefan wrote about a new start-up called Square, which enables iPhone users to accept credit card payments. Now we have another such company, VeriFone, which launched the service called Payware Mobile. However, unlike Square, VeriFone’s peripheral also serves as some kind of a case, making sure your iPhone is protected in a case you drop it. Actually, it will protect only the bottom part of the device — as you can see from the image above — so you better hope that in such an instance Murphy’s law is broken.

In addition, with Payware Mobile you can also accept signatures for those credit/debit card owners who don’t have/want to use their PIN code. I’m guessing the device will ship with some special stylus that works with capacitive touchscreen, cause otherwise it won’t work.

The problem is, like with Square, can VeriFone reach the tipping point and entice enough people to use its service.

Expected release date of the Payware Mobile is January 15, 2010, and at the moment you can pre-order the device. As for the pricing, the peripheral itself is free on a two-year contract, which apparently involves exclusive credit card processing deal. And we’re not sure how much that costs. In any case, I’m looking forward to see whether people dig the idea of processing credit cards on-the-go and if they do, which of the two companies (Square and VeriFone) will win this race…

Evernote, the online service with over 1 million users as of June 2009 that aims to remember everything by being...