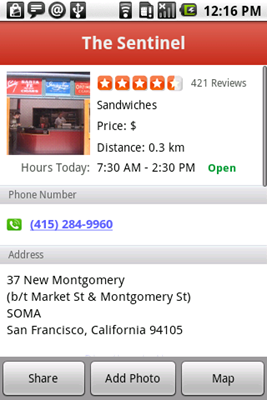 A tiny update for Yelp’s Android client is including some handy features, like logging into your account, uploading photos right from mobile, and sharing business info via SMS, e-mail, and Facebook. Yelp for Android was launched just a few short weeks ago, but it sounds like they’re gung-ho about bringing it up to speed with the webOS, BlackBerry, and iPhone apps.  They’re promising more features and platforms in the new year, so we’ll keep an eye out.

Their blog also had a recent post that answered a question I had been asking for awhile: why not allow reviewing via mobile? The short answer is that they’re trying to maintain a standard of quality in user reviews for restaurants and businesses, which I suppose makes sense. Truncated, misspelled, and vague reviews could quickly swamp Yelp, but drafting and the dedicated Quick Tips section on the iPhone should provide ample outlet for those eager to get reviewing a restaurant while they’re there. Hopefully we can see those two features on other versions of Yelp for mobile soon.

Foodies who want to get their critique on, or savvy consumers looking for real-people reviews can download Yelp for Android free in the Market.

The latest out of Nokia’s wonderful, magical Beta Labs is Image Space, which stitches together pictures shared from their phone...