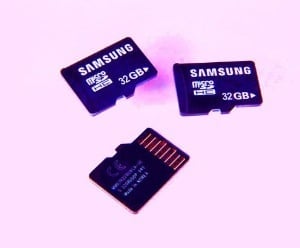 The upper-end of the microSDHC category has been reached! Samsung has announced that they’re working on 32 GB memory cards, which will be good news to media hogs who have long capped out 16 GB cards on their mobile phones. This is the first microSD card to hit 32 GB, and is the last denomination before moving to the microSDXC format, which will handle 32 GB – 2 TB. I talked with the SD association at CES this year, and it seems unlikely that we’ll have any micro cards breaking into 32 GB in the next six months (maybe something late next year, if I had to guess). That should at least give manufacturers some time to update their hardware to support XC. Samsung also announced that they’ll have a new 64 GB designation of their moviNAND memory, clocking in at 30-nm and 0.7mm high. The first 32 GB cards will be commercially available after mass production kicks in around February.