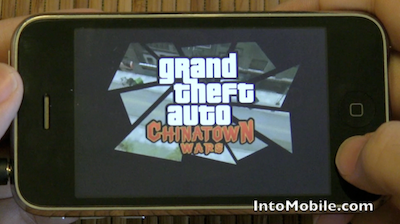 Earlier this morning, Rockstar released Grand Theft Auto: Chinatown Wars for the iPhone.  Seeing as I own the game on both the Nintendo DS & PSP, I knew I had to dive into the iPhone version as soon as it came out.

The first thing Grand Theft Auto: Chinatown Wars for the iPhone impressed me was by how beautiful the game was.  Its graphics are definitely a step above the Nintendo DS version, but not quite as detailed as the PSP version.  Regardless of the comparisons, the iPhone version of GTA: CW is still a feast for the eyes.  Compared to most other iPhone games available on the App Store, GTA: CW is one of the best looking games and it performs flawlessly on my slower iPhone 3G.

As is expected, all of the controls are located on-screen.  Depending on what your character is doing, those controls will change on the fly.  For example: If you have no weapon equipped, by default, the attack button’s icon will be a fist to indicate you’ll be performing melee moves.  If you pick up a gun, the gun will then take the place of the attack icon indicating you are holding a weapon.  The same goes for when you go from running around Liberty City to driving a vehicle.  It’s a minor detail, but one I wish other iPhone developers would incorporate in their titles as some games can litter the screen with buttons galore.

All of the mini-games, such as hot-wiring a vehicle, or scratching lottery tickets, can all be done using the screen.  This is how it was originally intended when GTA: CW first debuted on the Nintendo DS.  The mini-games are easy to understand thanks to prompts that come up to describe what needs to be done.  More importantly, the mini-games are fun to play and help in bringing the player into the game world.

As you progress through GTA: CW, you’ll come across a number of missions that can be completed at any time.  GTA: CW gives you a PDA which can be used to keep track of emails, which are where the majority of your emails come from.  When an important email pops up, a small, red envelope icon will be displayed.  The important emails progress the game’s story from main characters you’ll interact with during your travel through Liberty City.  Non-important emails show up as white and either be emails from drug dealers looking to barter with you, or other various smaller missions.

As far as first impressions go, I’m pleased with Rockstar Games’ offering.  The sights, sounds, and controversy the Grand Theft Auto series is known for is very well represented on the iPhone platform.  The controls take a little getting used to, but if you’ve played similar iPhone games, then the learning curve can be around 10 or so minutes.  I’m also very pleased with how low the price of the game is.  $9.99 is a complete bargain for the hours, days, and months gamers will be able to get out of Grand Theft Auto: Chinatown Wars.  If you’ve never experienced this game on either the Nintendo DS or PSP, then I urge you to pick it up for the iPhone as the experience is just as good.

Nexus One Unboxed by Freakin’ Ninjas

Most unboxings around these parts involve the stuttered fumbling of tech bloggers making banal comments on wires, headphones, and chargers....