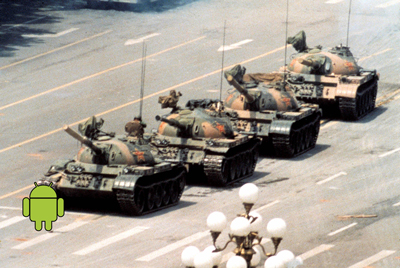 Those of you who follow tech news at large will have likely already heard about the aggressive cyberattack on Google originating from China, and the company’s reassessment of their position in the country. As is, it’s been hard enough for Google to suck up their pride and allow search results to be filtered according to the local politics, though some speculate Google’s current counterpressure is partially motivated to expand their comparatively small Chinese market share. That backlash is expanding into mobile, as the search giant has apparently postponed the launch of two new Android handsets until this situation clears up. The phones in question were to be announced on Wednesday, coming from Motorola and Samsung and sold through China Unicom. The motoroi and Shadow are potential candidates, but the only upcoming Samsung Android device we’ve heard about in the area is the Saturn. The potential for Android to never find its way into China after this episode is even scarier than the local search engine itself shutting down, since the use of Android expands well beyond Google, while most Chinese web surfers are already using another search engine.

MOTOROI hitting U.S. in March; Other countries to follow

Yesterday we saw the first MOTO-made Android phone being unveiled in South Korea. If you recall (and you should, it...