Everything was going great at Apple, until today. The Macs are selling because Vista was a terrible operating system, and while Windows 7 is better, it’s still not considered “cool” to own an HP, Dell or Acer computer. The iPhones are selling because they truly are awesome pieces of technology. You can fit a web browser, camera, and more into something small enough to put inside your pocket. Our European and Asian audience will scream that Nokia has been doing this for years, which is true, but you don’t see your 90 year old grandma using her Nokia to watch an episode of her favorite television program while commuting on the New York City Subway to Brooklyn to see her grandchildren.

Then, for some strange reason, Apple announced the iPad. This following slide is telling: 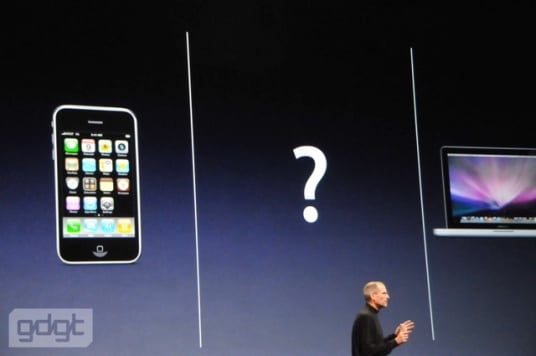 Apple is already making 40% margins on mobile phones, and on computers, so why not fill that gap, between two highly successful product categories, with yet another piece of hardware that can reap the same 40% margins? Even if it doesn’t sell in the millions of units, it’s still going to make the company a lot of money. It’s as if the iPad was created just to increase Apple’s already swelling bottom line. They’re frankly getting a bit greedy.

You’ll be able to buy productivity applications, one for presentations, one for spreadsheets, and one for word processing, for $10 each. Why not just bundle them with the product?

You’ll be able to buy books at $14.99 instead of the $9.99 you can pay today for Kindle books, which by the way can be read on a dedicated device that costs half the price.

But wait a minute, the iPad does more than a Kindle can! It can browse the web, it can play music, it can play videos, which is all very well and good, until you realize that you already have two devices, your mobile phone and your laptop, that can do the exact same things.

Pricing, here is the kicker, it’s going to cost $500 for the base model without a built in cellular modem, and $630 for the base model with 3G inside, on top of an additional monthly fee of $30/month that you’ll need to pay for data. Really, I mean really? For twice that amount you can buy a full fledged computer, a MacBook. It can do everything the iPad can, but at the same time, and it also has a webcam so you can call your grandma. For that same $500 you can buy an iPhone, which is infinitely more useful since it’s always going to be with you.

Hey now hold on, the iPad has a large 9.7 inch screen, that’s bigger than the iPhone, but smaller, and thus more portable than my laptop!

You’re not getting the point, it’s a product created for a market that Apple, along with every other hardware maker with dollar signs in their eyes, believes should exist. Slate computing isn’t new, people have been doing it since the early part of last decade when Microsoft was dabbling in the space. Buy a touch screen enabled Windows 7 device today and you’ll get the best handwriting recognition on the market, and oh yea, it also supports multitouch, and chances are high that said device will also have a keyboard attached for when you need to do some actual, you know, real work.

This rant is less about the iPad itself and more about the product category. I bitched and moaned endlessly in a missive that contained over 3000 words about the string of rumors leading up to the introduction of the iPad today, and frankly I’d be wasting time if I did the same thing right now.

The iPad, to me, is Apple saying that they’re going to enter a brand new market, confidently, with the assumption that their brand alone is going to help them succeed.

Look how well that worked with Apple TV.

[For those who care: Apple iPad spec sheet]
[iPad Press Release]
[“Jumping the shark” on Wikipedia in case you don’t understand the reference]

It's official, Apple has just launched their first ever tablet device as the "iPad." It seems rumors of the tablet...