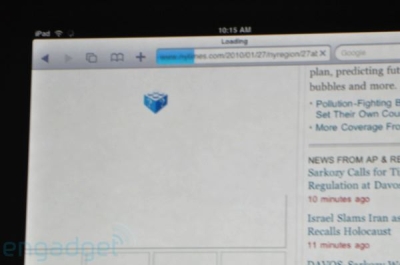 Adrian Ludwig, an Adobe employee, wrote a blog post on Adobe’s official Flash Platform blog that blasts Apple and their stubbornness regarding Flash.

It looks like Apple is continuing to impose restrictions on their devices that limit both content publishers and consumers. Unlike many other ebook readers using the ePub file format, consumers will not be able to access ePub content with Apple’s DRM technology on devices made by other manufacturers. And without Flash support, iPad users will not be able to access the full range of web content, including over 70% of games and 75% of video on the web.

If I want to use the iPad to connect to Disney, Hulu, Miniclip, Farmville, ESPN, Kongregate, or JibJab — not to mention the millions of other sites on the web — I’ll be out of luck.

Adobe and more than 50 of our partners in the Open Screen Project are working to enable developers and content publishers to deliver to any device, so that consumers have open access to their favorite interactive media, content, and applications across platform, regardless of the device that people choose to use.

Harsh words coming from a company that sells so much creative software for Mac OS X, software that’s the very reason the Mac platform took off in creative industries in the early days and planted the seed for the increasing the Mac user base today. To Apple’s defense, and I never thought I’d write those words, they’re probably waiting for Adobe to make Flash 10.1 available which has not only ARM support, but can use a hardware accelerated graphics chip to offload processing that would otherwise have to be done on the applications processor.

Sure Nokia devices have Flash support, and you’ll hear Nokia fans and employees talk that feature up and down, but in my experience using Flash enabled websites, videos, or games is a complete and utter miserable experience. Just because you can do something, like ride a bike, doesn’t mean you should try and compete in the Tour De France.

Steve Jobs’ is a fantastic marketeer and he’ll get up on stage at some point in 2010 and say “we’ve heard your requests, and we’re going to give you Flash”. The Apple bloggers will spin the statement as a testament that Apple really does listen to their customers and that Cupertino was just waiting until Flash was fully optimized before deploying it to their customers. Both companies look like assholes at this point. Adobe for not hurrying their ass up and getting a competent version of Flash out there for mobile devices, and Apple for failing to acknowledge that they lack Flash support and giving people a concrete list of reasons why that is.

Citibank, which is nowadays best known as one of the biggest "users" of TARP money, is out with an updated...