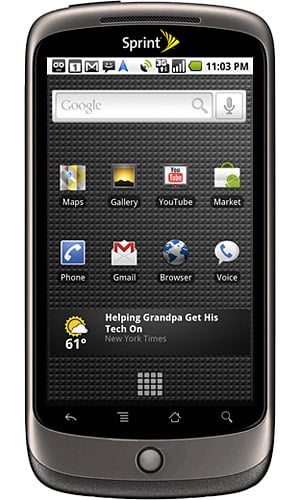 The Nexus One and Google’s decision to sell it unlocked and contract-free will go a long way in fighting the iPhone, but Google’s premier Android phone is so far only available on T-Mobile’s network. You can try to use the Nexus One on AT&T, but you’ll only get slower EDGE data speeds – we don’t consider the N1 compatible with anyone outside of T-Mobile. But, that may soon change. New rumors have hit the web, indicating that the Nexus One will be coming to Sprint with full 3G compatibility. Sprint may not have been left out in the cold, after all.

Following on a recent FCC filing that hinted at an AT&T 3G-compatible Nexus One coming down the pipeline, new whispers along the mobile grapevine suggest that Sprint will offer the N1 in due time. The rumors are based on an email reply to an inquiry about the N1’s status on Sprint. The email mentions that the Nexus One “is not on offer as of now” but that “once it is launched” we’ll be seeing promotional N1 campaigns coming out the wazoo.

“Thank you for contacting Sprint regarding the nexus one.

Unfortunately, this handset model is not on offer as of now.

Once it is launched, you will see promotional campaigns related to the launch date, cost and the features of the handset on our Web site and other promotional media.

Thank you for showing interest in our products & services. Please let us know if you would like us to assist you with anything else.” [emphasis ours]

The wording in the email is suggestive indeed. With Verizon already stated as the next Nexus One partner, and AT&T almost a sure thing, it makes sense that Google would give the N1 to Sprint. That would round out the Big Four US wireless carriers. No word on any launch dates for AT&T or Sprint. Expect the N1 to hit Big Red in the Spring of 2010.

The latest Android creation from Motorola, the Backflip, was announced only at CES a few weeks ago, and it has...