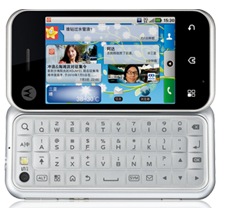 The latest Android creation from Motorola, the Backflip, was announced only at CES a few weeks ago, and it has already been launched in Beijing, Shanghai, Guangzhou and Chongqing. Motorola is currently selling the Backflip (ME600) there for $629 (4298 Yuan), and will run on China Unicom’s network. Besides running Android 1.5, the Backflip also has Motorola’s signature blur user interface and widgets, as well as 3G, Wi-Fi, GPS, 3.1” HVGA display, 5 megapixel camera, and a crazy (but expected) backwards-flipping form factor. Signs are good that AT&T will be picking this up as their first Android handset soon, but we haven’t heard anything official as of yet. It’s interesting that Motorola launched this in China first, since there’s already an abundance of cell phone manufacturers over there that have the local market locked down pretty tight, and Moto’s home turf is the good ol’ U. S. of A. Even if the Backflip doesn’t do well in China, odds are it’ll do reasonably well over here. If you’re in China and want to pick up one of these suckers, however, the Backflip can be found on Motorola China’s online store.