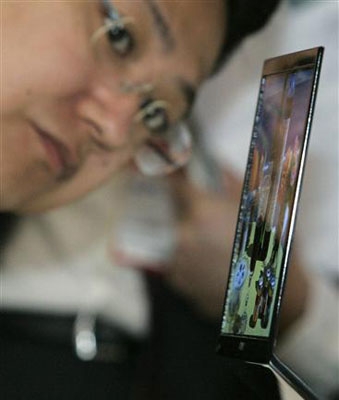 Yesterday Samsung announced that they’re going to being mass production of a 3.3 inch AMOLED screen, with a resolution of 800×480 pixels, and that has a multitouch layer built into the screen itself, during March. Usually when one builds a multitouch screen they start with a plain old display, and then slap a multitouch sensor on top. With this new 3.3 inch beauty, the touch sensor is 0.001 mm thick and comes built in. It saves cost, allows the screen to be brighter, and will yield even thinner devices.

Will we see this on the next iPhone? Apple has signed a deal with LG for screens, but it’s unknown whether that also include screens for mobile devices, so the best I can say is I don’t know. Will we see this in Samsung handset first? My spidey sense tells me yes. Will we see a huge number of 3.3 inch devices hit the market by the end of this year? I most certainly hope so. I’m sick and tired of screens getting bigger, and bigger, and bigger. My pocket is only so large.

[Via: Korea IT Times]
[Picture unrelated to this article, it’s a Sony OLED TV in case you’re wondering]

I'm not sure whether we should believe the image above, but apparently it's the successor to Samsung's first Android smartphone...