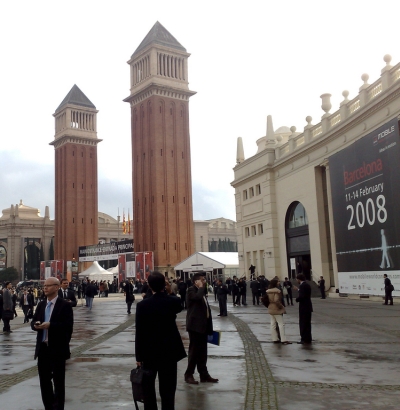 It’s difficult to describe what attending Mobile World Congress is like. I’ve only been there once, in 2008, and I’m excited to be going again this year. For those of you who have never heard of Mobile World Congress, it’s a trade show where everyone in the mobile telecommunications industry, from device makers, to infrastructure providers, to software vendors, all get together and either try to network their way into a big fat business deal, get the attention of the press, or simply relax and enjoy a few days away from the office and the wife and kids. It’s been taking place since 1987, and has been held at the Fira de Barcelona in Spain since 2007. It actually used to be called 3GSM, but since WiMAX isn’t based on any previous GSM architecture, the name had to be changed to be more accommodating for any new wireless technologies being demonstrated. To give you an idea how big this thing is, more than 47,000 people were at last year’s event.

I’ll never forget Mobile World Congress 2008 because it was the first time I got to meet my team in the flesh, since we all work remotely, that and I got to check out the city of Barcelona. I’ve been to Spain before, but only to Madrid. Dusan arranged for our apartment, and we got a really good deal, but regret started sinking in the moment we got out of our cab and confirmed that the address scribbled on the back of my itinerary was indeed correct. The front door leading to the lobby, and the lobby itself, was covered in urine, there was no heating except for the electric radiators we all took turns sitting in front of, the 5 of us had to share 2 beds, thankfully some people brought sleeping bags, our only source of internet access was a Windows Mobile device that had some hotspot software installed, and our water boiler mounted directly above the toilet provided barely 5 minutes of lukewarm water to shower with. It’s wasn’t all doom and gloom however, by the end of our trip we fell in love with that place and to this day I miss it dearly; the location was phenomenal, it was quite literally in the center of town.

This year I’m excited that I’ll get to meet Simon and Ben, IntoMobile’s newest Editors, and see the old team after two long years. We have a proper hotel lined up this time, right next to the Sagrada Familia, and we actually have a plan in terms of how we’re going to upload content, rather than simply wandering around aimlessly like we did before, and then find a local internet café to get our material up to the website. Enough with the reminiscing, what about Mobile World Congress 2010 is exciting the team?

I have to share Will’s enthusiasm for Windows Mobile 7. Microsoft is not a stupid company, and they’ve proven that they can innovate. Windows 7 compared to Windows XP and Vista, XBOX 360 compared to XBOX, Office 2007 compared to Office 2003, there are talented people inside Microsoft and they know that the mobile space has potential to bring a lot of revenue to their bottom line. Windows Mobile is still the only smartphone OS that manufacturers have to pay to use, so Microsoft has to justify why they should keep on paying those fees versus building something with Android or Symbian instead. Speaking about Android, I don’t share the team’s upbeat attitude. The industry was hoping Android would be an awesome competitor to Apple’s iPhone, but it’s been 15 months since the T-Mobile G1 shipped and we’ve yet to see an Android device that makes anyone really go “WOW”. Google needs to shove that OS back into the oven for at least another year or two, then maybe it’ll be worthy of attention.

I’m curious to see what Simon has to say about App Planet, and I may even check out the side event myself. For all this talk about mobile applications, and how they’re changing the world, I’m still using the same handful of applications on my Nokia E71, a handset that will turn 2 years old this summer by the way, that I’ve been using since getting the device. As for what excites me the most about this upcoming event, it’s the people. 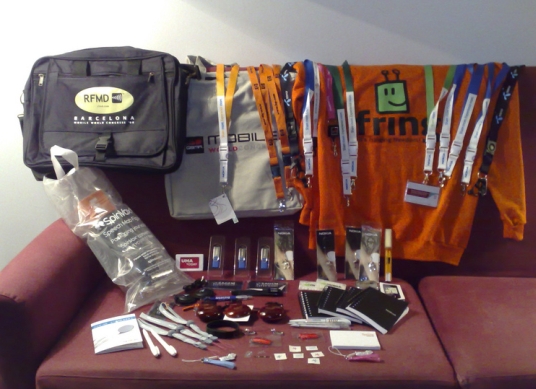 I personally hate trade shows. They’re full of irrational attendees who probably make double, or even triple what I do, yet they still fight over free coffee, pens, posters, shirts, lanyards, and other promotional material that medium and large size companies use to lure people to their booth. Small time developers and startups save up enough of their pennies to get a booth, but forget to bring anything more than a table, a chair, maybe a poster that’s obviously a rush job done in Photoshop and printed at the local Kinko’s, and only 1, if you’re lucky 2, devices to demo their application.

The giants, like Nokia and Sony Ericsson, announce devices that don’t come out for months, and if a model is buggy then you don’t even get to play with it, you only see a highly controlled demo given by someone who is scared shitless that if they open an application that wasn’t supposed to be launched, the entire phone will suddenly reboot. Remember the Sony XPERIA X1? No one was allowed to get hands on time, and it finally started shipping by December of that same year, in limited quantity. You’re going to see a repeat of that at least once or twice. But wait, there’s more!

Transatlantic flying ranks up there as one of my most hated activities. They absolutely destroy your sense of time of space, and I honestly don’t know how one is supposed to sit down for 10 hours. I’m always waling up and down the aisles, not because I’m claustrophobic, but because I need to get my blood moving. Then you get off the plane, customs takes forever and you now need to deal with a cab driver who doesn’t speak English or understand the address you’re written down of where you’re supposed to go.

Barcelona, once you get there, is a beautiful city, but it never shuts up. I grew up in New York City, supposedly the city that never sleeps, but it’s got nothing on this place. The streets of Barcelona are as packed at 3 and 4 in the morning as they are at 5 and 6 in the afternoon. It’s fun, you feel that party vibe that transcends nationality and language, but combine that and the previously mentioned jet lag, and you’re just asking to get your sleep cycle mutilated. When you do finally wake up, you need to check your email for any last minute scheduling changes, and that’s a whole other level of hell.

My inbox is packed, stuffed to the gills, with people requesting meetings. Some people have emailed me 3, even 4 times, with the very same email, asking for a meeting with the company they represent. A company that I’ve never heard of and whose website looks like it was designed in 1994 and hasn’t been updated since. It’s painful.

But after all of that, the bitterness, the anger, the doubt cast upon your decision to even come to this stupid thing, the people make the experience completely worth it. All my fellow press people that I chat with over instant messenger, or on Twitter, I finally get to sit down face to face with over a beer and have a genuine conversation about what’s going on at the event. Shaking hands with folks that your friends introduce you to at the bar that’s so packed it takes 10 minutes of saying “I’m sorry” in 3 or 4 different languages before you get to the back and have to queue to take a piss. All the people who work for large companies who I regularly talk to, yet who will never feed me a rumour, suddenly will after a bottle of red wine from Rioja and a bloody rare piece of steak that they’re paying for since they’ve got an expense account. Meeting the guys who I’m honored to call my colleagues.

That’s what I’m most excited about, and I can’t wait to get on that flight from Dallas to Atlanta to Madrid to Barcelona.

DoCoMo to showcase eye-controlled interface, handset made of real wood at the MWC

We do know NTT DoCoMo will be showing off the first LTE-enabled devices at the Mobile World Congress in Barcelona....