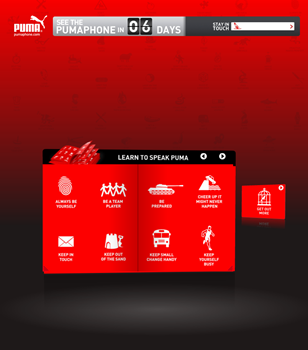 Awhile back, we had heard that Sagem was working with shoe-maker puma to create a sports-centric handset. In yet another pre-Mobile World Congress move, puma has launched a teaser site with some 150 cryptic clues and videos that apparently has something to do with the mystery phone. Hit up pumaphone.com to see if you can decipher any of it. Our buddy Greg has dug up some solid information from the site’s source code that gives us a clearer idea of what to expect.

Social networking, media sharing, sports news, location and performance monitoring all seem to be a part of the package. The only other big name in sportswear that’s doing much with mobile is Nike, and even then, it’s not as extensive as a proper phone. The countdown puts the pumaphone dab smack at Mobile World Congress, so we’ll be sure to check out the device in person next week. Sagem will also be doing some cool stuff with fingerprint scanning at MWC, which will be interesting to see.

It’s just too bad the only thing that comes to mind when I hear the word "puma" is Halo.

Verizon had announced the Motorola devour last week (after a long string of prerelease sneak peeks) as a cheaper alternative...