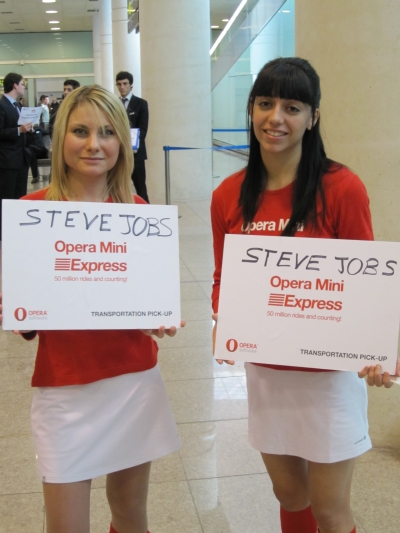 After nearly 20 hours of flying, Dallas to Atlanta, Atlanta to Madrid, and Madrid to Barcelona, with several 2 to 3 hour layovers in between, there were two girls that appeared right after customs that managed to put a smile on my face.

For those of you not in the loop, Opera is showing off Opera Mini on the iPhone this year at Mobile World Congress. It’s not a Java emulator running the current existing version of Opera Mini, it’s Opera Mini rewritten in Apple’s Objective-C. We got a sneak peak of the iPhone client at ShowStoppers this year, but sadly were not allowed to record the demo or take photographs. 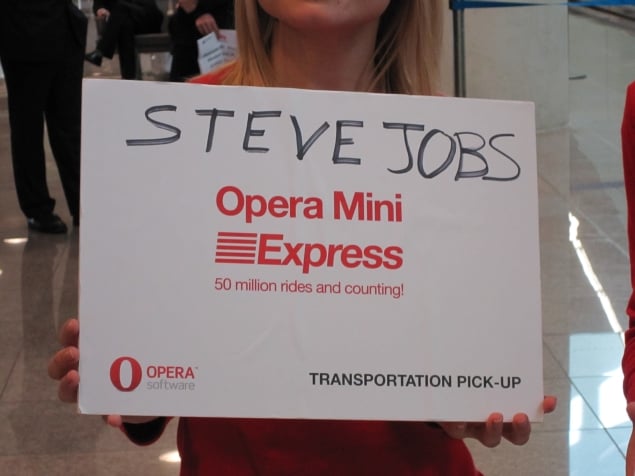 Better than the demo, which was flawless by the way, was this sign that the previously mentioned girls were holding. It had Steve Jobs’ name on it, playing towards the concerns the media had that Apple isn’t going to improve the application, and you can’t read “50 million rides and counting” without a smirk popping up on your face. Opera said that Opera Mini for the iPhone doesn’t do any actual HTML interpretation on the iPhone itself, everything happens on Opera’s servers, so there should be no technical reason why it shouldn’t be approved. The guy at ShowStoppers, whose name escapes me at the moment, was really confident when he said that Opera went through the developer EULA with a fine tooth comb to make sure that they didn’t violate any of the terms of service.

One thing is for sure, AT&T could sure as hell use Opera Mini to get some strain off their network. With Opera Mini, a site can be compressed by up to 90%, and it definitely showed when we saw a side by side comparison. We’ll try our hardest to get Opera’s marketing guy to change his mind letting us make a video, or at least find some way to distract him. We’re in Spain for practically a whole week!

Mobile World Congress has yet to officially get underway, but that didn't stop Samsung from taking the early-announcer advantage and...