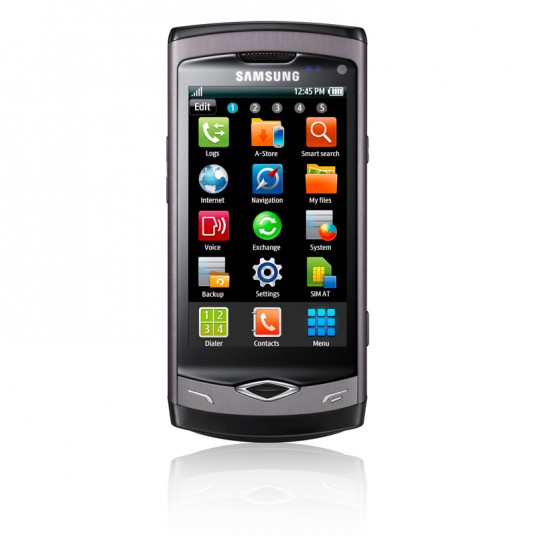 Mobile World Congress has yet to officially get underway, but that didn’t stop Samsung from taking the early-announcer advantage and unveiling the Samsung S8500 Wave as their first ever smartphone powered by the Bada OS. It’s powered by a 1Ghz processor, sports a 5-megapixel camera (with flash), and rocks an amazingly crisp and bright Super AMOLED display that measures 3.3-inches on the diagonal. Samsung says they’re all about “democratizing” smartphones by making them cheap enough for people in walks of life to take a stab at the brave new world of smartphones, and by the looks of the Wave, they’re off to a good start.

The Samsung Bada OS is basically like Samsung’s TouchWiz UI turned into a standalone smartphone OS. Just like its TouchWiz roots, the Bada OS uses widgets. In fact, Samsung refers to this latest iteration of TouchWiz as TouchWiz 3.0. You can customize up to 10 different homescreen panes with the widgets of your choice. The UI feels a lot like Android OS, which isn’t a bad thing.

On the mobile app side of things, Bada OS offers apps ranging from standard smartphone fare like email and browser to media widgets like the YouTube and Video Editor widgets. If that doesn’t quench your thirst for Bada apps, the Samsung Apps store will be standing by, ready to serve up all the apps you can eat.

Now, the Bada OS is intended to be used on smartphones that are cheap enough to be affordable to people in countries where carrier subsidies are a wishful dream. But, we have a hard time seeing the Samsung Wave coming in at a price point that would qualify for the low-end. The Samsung Wave features an incredible 3.3-inch WVGA (800×480) Super AMOLED capacitive touchscreen that blows every other smartphone display out of the water. It has a 1Ghz processor, a 5-megapixel camera (with flash), Bluetooth 3.0, GPS, 3G data, and a microSD card slot that supplements the 2GB or 8GB (depending ont the model) of onboard storage. Talk about one badass Bada phone.

The Wave is slim, constructed out of aluminum, and has the kind of design chops that we normally see in high-end smartphones. That’s what makes the Wave so surprising as the first ever Bada OS phone. The phone is expected to go global in April 2010, unless you’re in the US.