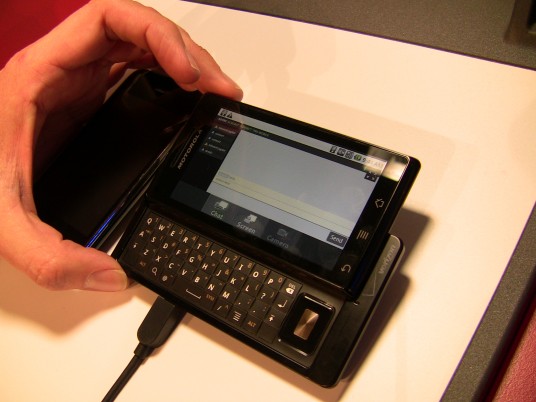 Apple may not be on friendly terms with Adobe Flash for the iPhone, but that isn’t stopping Adobe from pushing even further into the smartphone space. With Adobe Flash Player 10.1 ramping up for a serious blitz on smartphones of all creeds and colors, Adobe is taking their AIR technology to the next step. Adobe has announced AIR for Android as part of the company’s cross-platform mobile app development services. Why rewrite your mobile app code several times to get your app on iPhone, Android, Windows Mobile, WebOS, etc. ,etc., when all you have to do is write your app once in Adobe AIR.

Adobe AIR has traditionally been used to develop desktop applications that work on any operating system. It’s all about coding once and distributing across multiple platforms. Today, Adobe has announced that it will be bringing AIR to smartphones, starting with Android and BlackBerry. The idea is to allow mobile app developers to develop apps using its Flash developer tools and export that app to Android, BlackBerry, Flash web-apps and even iPhone apps that can be submitted to the iTunes AppStore.

It’s been long-known that Apple isn’t going to let Flash on the iPhone, so we’re probably not going to see AIR apps coming 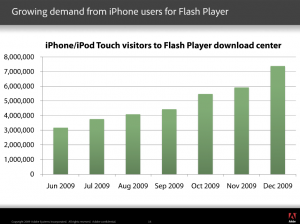 directly to the iPhone anytime soon. But, with the ability to code an app in AIR and export the app as an iPhone app, it’s as close to Adobe-love that iPhone devs will ever get.

So, what does Adobe have to say about Flash on the iPhone? Well, they’re not talking specifically about the chances of Flash on iPhone, but Adobe does have this interesting little slide that shows the growth of iPhone users interested in Flash. Last December, Adobe saw 7 million iPhone users attempting to download Flash Player. That’s a nice little increase from the 3 million iPhone users that tried to get Flash on their iPhones in July of 2009. The increase in number of iPhone users wanting Flash seems to be out-pacing the growth of Apple’s iPhone market share, which is an interesting little stat. Perhaps Apple will have to eventually give in to Flash if consumer demand is high enough.

After the CLIQ/DEXT and Backflip, Motorola is launching another MOTOBLUR UI-enabled Android smartphone - QUENCH aka Zeppelin, which will be...