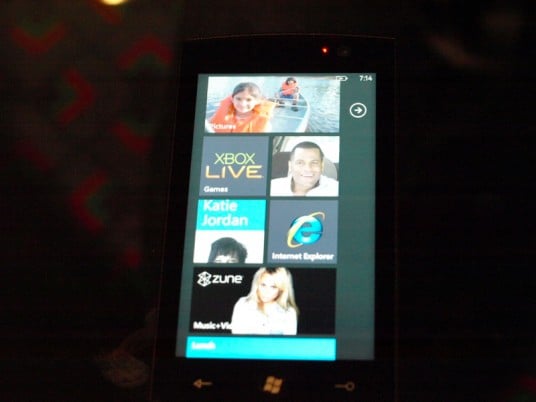 Microsoft’s Windows Mobile 7 Series unveiling wasn’t just a new product launch for the software maker, it was a re-branding of the company’s mobile operating system – moving away from “Windows Mobile” and moving towards the new age of “Windows Phone.” The press conference gave us an interesting look into the future of Windows Phone 7 Series, but we just had to get a more personal look at the revamped Windows Phone UI.

The version of Windows Phone 7 Series that we sat down with was still early-stage and still needed a bit more work, but the video below will give you a really good idea of what to expect when the revamped mobile OS goes live in Q4 2010. Notice the lack of app icons and the use of lots of window panes. Also, notice the clear fonts, made possible by sub-pixel rendering technology that manipulates the individual red, green, and blue color elements within each pixel to create extremely sharp and readable fonts at any zoom level.

Bing Maps zooms in smoothly and automatically fades into satellite view when going to street-level zoom – Windows Phone 7 Series assumes that when you’re in that close, you probably want to see the map as it looks in the real world. Music is highly integrated with Zune functionality, and gaming is tied to your Xbox Live account. The browser still seems to need work, but again, this is an early version of Windows Phone 7 Series.

Hit the video below for a look at Windows Phone 7 Series.

The GSMA gave Steve Jobs the "Mobile Personality of the Year" award, but he wasn't there to accept it. Even...