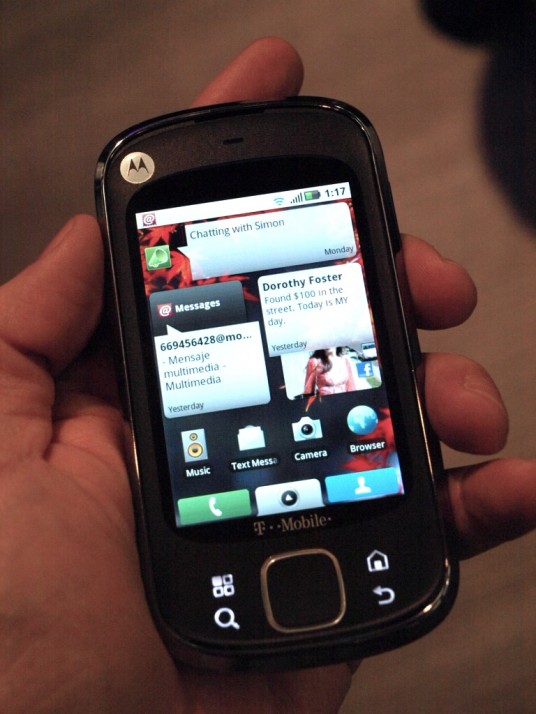 Earlier this week, Motorola announced the Quench (or Cliq XT, as it will be known in the U.S.), and we got a chance to play with it here at Mobile World Congress. As you might already know, the Quench packs a 3.1-inch OLED capacitive touchscreen, Android 1.5 with MotoBLUR, rocks a 5 megapixel camera with LED flash, Webkit browser with Flash Lite support, GPS, Wi-Fi, 3G, and all of the usual Google goodies you come to expect preloaded.

Motorola has been cranking out the Android phones like it ain’t no thang, and this one in particular has been spotted repeatedly prior to production as the Zeppelin. Considering the Quench is Motorola’s umpteenth Blur phone in recent memory, it feels like the bulk of their Android handsets will be running the custom-built service and user interface from here on in, but we have to remember that both the Motoroi and Milestone are running on vanilla Google software.

So, how did the Quench actually fare? Well, I found the border around the display a little thick, but overall, the the device is pretty slick – Swype comes preloaded for quick, gesture-based typing, Zune-esque touch-sensitive directional pad is highly distinctive, and as their only full-touchscreen device without a keyboard, it will round out Motorola’s Android family nicely. If you guys are digging it, the Cliq XT will be available from T-Mobile next month.

eBay is expanding its mobile reach with a dedicated Android application. Sure, you could use their mobile site, but a...