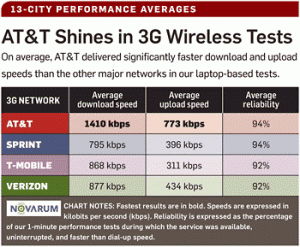 It looks like AT&T’s network upgrades are paying off, as the carrier’s 3G network bested Sprint, T-Mobile, and Verizon in  PCWorld’s 13-city mobile data test.

The report said AT&T’s download speeds were 67 percent faster on average than its competitors, with an average download speed of 1410 kbps and 773 kbps upload. This is a major turnaround for AT&T because it performed poorly in a similar test conducted last spring. Last spring, testers could only access AT&T’s 3G network 64 percent of the time, but that number increased to 94 percent in the latest go around.

There’s a lot of griping from iPhone users in San Francisco and New York but the test said the iPhone/AT&T combo outperformed any other combination on other carriers. “AT&T connected the iPhone at an average download speed of 1259 kbps, and an average upload speed of 215 kbps over the13 testing cities,” PCWorld said in its report.

On the opposite side, Verizon’s average download speeds decreased by 8 percent. Big Red’s reliability did improve though, but it appears to be struggling to keep up with the demand of data-hungry devices like the Droid. PCWorld said the Droid rarely delivered the promised upload speeds of 500 kbps and the average upload speed was a meager 116 kbps.

Sprint remains solid by providing 795 kbps down and 296 kbps up. T-Mobile seems to be doing a good job of growing its mobile broadband network, as testers even clocked average download speed of 3 mbps in New York. This was only for a one-minute test though, so don’t get your hopes up as T-Mobile averaged 868 kbps down and 311 kbps up. The test also found T-Mobile’s network to be a bit inconsistent, so it will be interesting to watch how the HSPA+ upgrade goes.

Google and the four major U.S. carriers (AT&T, Verizon, Sprint, T-Mobile) told the FCC that early-termination fees are necessary to...