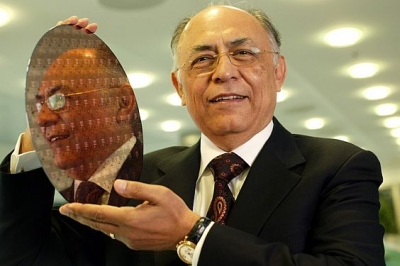 Once upon a time there was a company called Advanced Micro Devices. Their largest competitor was Intel. Both companies competed not only on who made the fastest processor, but who made the best processor manufacturing plants that the world has ever seen. These massive, expensive, difficult to build factories are called fabs. AMD was losing money, and fast, because Intel wasn’t playing fair. They gave their customers incentives to keep on buying Intel chips, and to avoid AMD all together. AMD took Intel to court and won, but the damage was already done and AMD split up. AMD is still AMD, but they don’t make their own chips anymore. They sold their fabs, and now they’re operating under a new name: Global Foundries.

Global Foundries called up ARM one day and said: “You stinky Brit, we’re making 28 nanometer transistors, and we know the next biggest thing is the mobile space, so can we get some of your Cortex A9 intellectual property?” To which ARM replied: “What? What? Yes! Yes! Cheerio!”

And with that the 28 nanometer ARM Cortex A9 was born, offering 40% faster performance, while also reducing power consumption by 30%. Expect to see processor coming out of Global Foundries during the second half of this year, and possibly end up in devices you’ll be able to purchase during 2011.

Some HTC Droid Eris users are reportedly already getting over-the-air updates to Android 2.1, so it's not surprising to see...