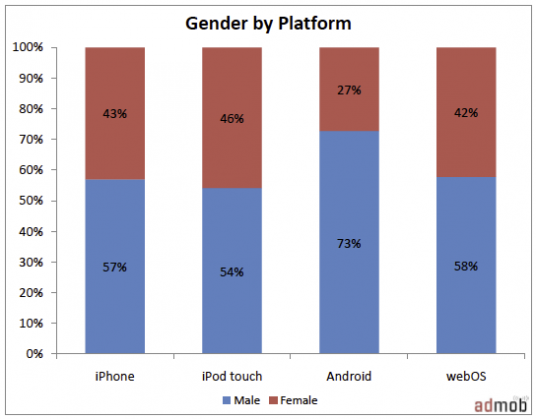 Apple fans are some of the most loyal bunch of customers any tech company could ever hope to have, and when it comes to the iPhone, users are almost guaranteed to recommend the iPhone. A new report from mobile advertising firm AdMob indicates that a whopping 91% of iPhone users are so impressed with their handset of choice that they’d get on Apple’s soapbox to push the iPhone to others.

The iPhone has traditionally scored well on satisfaction surveys, so it’s not too surprising to see that 9 out of 10 iPhone users would be willing to back the iPhone. What is surprising, though, is how far behind Palm’s webOS lags behind iPhone. Of those surveyed, just 69% of webOS smartphone users would recommend their device to others. To put that another way, webOS users are 3.4x more likely to steer other clear of the webOS than an iPhone user would be with the iPhone OS.

Bringing up the middle of the pack is Android. A healthy 84% of Android users would apparently recommend their device to others. While not as impressive as the iPhone’s numbers, it’s clear that Google’s mobile operating system has what it takes to keep a hold on its user base.

Interestingly, the gender splits on the iPhone OS, webOS and Android OS aren’t all equal. The iPhone platform boasts a near-equal split between male (57%) and female (43%) users. WebOS is also split down the middle, with 58% male and 42% female. But, when it comes to Android, gender equality takes a back seat to male-dominated geekery. Android skews heavily male, with 73% of users sporting twigs and berries.

The figures do fit our experience – how many female Android users do you know? Would you recommend your iPhone/webOS/Android phone to friends, family and strangers?