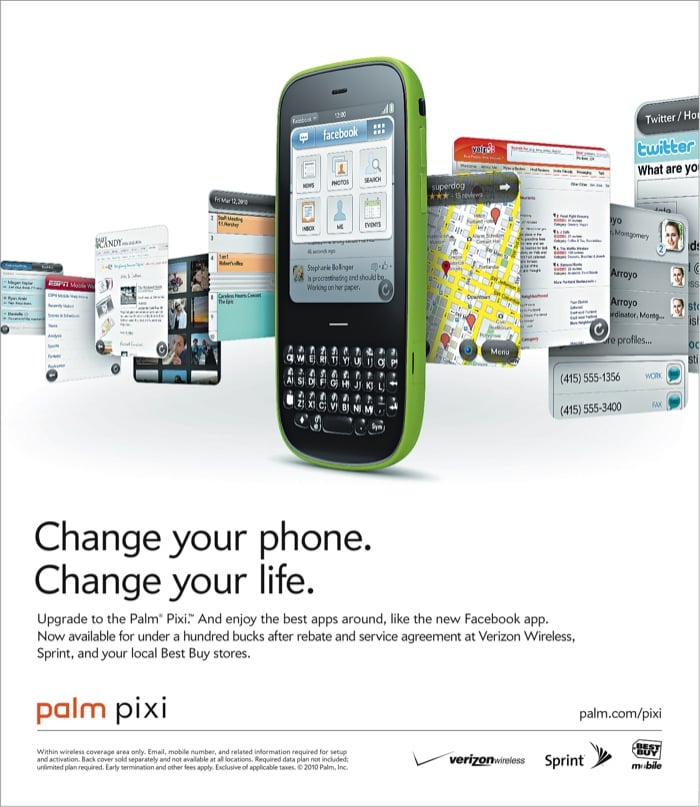 The Palm Pixi was showing an unfamiliar version of its Facebook application in a SF Weekly ad recently, hinting that the existing ho-hum version is due for an extensive upgrade in the near future. Previously, Facebook on the Palm Pre and Pixi could only handle simple friend feed viewing, status updating, and picture sharing. In this fuzzy picture, we can see options in a drop-down menu for search, checking events, visiting your own profile,  messages inbox, and taking a look at posted photos.

Now, Palm can hardly be blamed for not being web 2.0-savvy because of their current lackluster Facebook application – webOS already incorporates Facebook natively through Synergy, which nabs contact information and pictures from your various social networks to populate the address book. On top of that, webOS enjoyed a sizeable update recently, including video recording and the ability to share to Facebook right from the video gallery.

Still, Synergy doesn’t quite equate to a standalone experience that emulates the Facebook page itself, and is a clear gap Palm needs to address. Even if this blurry snapshot turns out to be true, there’s no saying if things like profile editing, or Liking and commenting on news items is included. Bigger players, like RIM, are in a similar position, trying to their own social networking gaps, like Twitter and LinkedIn, so Palm is by no means alone in their work, but Palm’s rough financial performance warrants some hustle on getting these no-brainer features out and into the public’s hands.

What kind of Facebook features are you Palm Pre owners hurting for most? After Facebook, which social network should Palm tackle next?

Record on the go with Comcast’s updated iPhone app

When it comes down to it, what you really want from a Comcast mobile application is to be able to...