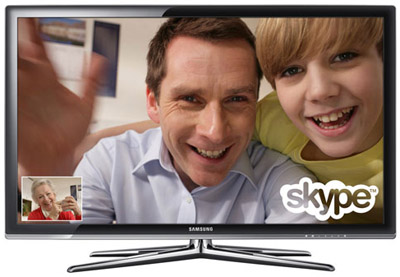 Back in January, we talked about Skype’s idea to go beyond computers and mobile phones. During CES in Las Vegas, the company unveiled plans to integrate its VoIP service into TV sets and right from the bat, it found partners in Panasonic and LG.

Samsung is joining the game, but not in a “native way,” at least not for now. THE LED 7000 and 8000 Series will feature Skype capabilities once they are equipped with the Freetalk TV camera, which is available from the Skype Store. When that is set, users will be able to make and take Skype audio and video calls right from the comfort of their big-ass chair, navigating though menus using Samsung TV’s remote control.

It’s great to see all modern devices adding new functionalities, and I’ve no doubts that in a not that distant future we’ll be able to perform many of the functions a PC is required today on a TV or smartphone (which on its end could be connected to a larger screen). In the meantime, we still need multiple devices…

Time for a new entry-level flip phone on Bell. As expected, 'Big Blue' has officially released the Samsung R330, a...