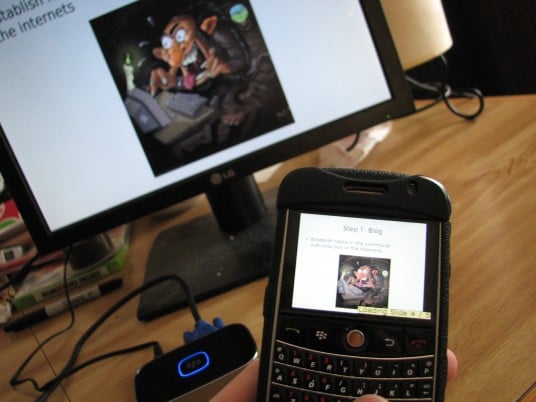 One of the casualties of the frantic business of Mobile World Congress was some playtime I had planned with the BlackBerry Presenter, announced at CES. Now that the dust has settled, I’ve had some time to sit and and have a go with RIM’s latest accessory. In short, the BlackBerry Presenter allows you to control PowerPoint presentations from your handset (complete with speaking notes, loop control, frame freezing, and blank screens), and all you have to do is plug this little Bluetooth hub into the display in question.

For $200, this isn’t something priced for the average consumer. It’s clearly for enterprises with mobile workforces that have people moving around and doing a lot of PowerPoint presentations. I definitely don’t fit in that demographic, so can’t really call this a proper review and whether or not it is a worthwhile value proposition; at very least, I can say that it does what it says it does (if a touch laggy), and the handheld software is better managed than the Impatica ShowMate, which is the first accessory to do this kind of thing. If one were to upgrade the preloaded DataViz document viewing software on their BlackBerry to enable PowerPoint file creation on top of owning the Presenter, the combo would surely create an unstoppable public speaking machine, whose trail of impressed associates and closed business deals would stretch beyond the horizon.

In any case, here’s a few pictures demonstrating the Presenter in all of its glory. You can find more info and pick one up at blackberry.com/presenter.

EnStream, a joint venture between Canadian carriers for a unified mobile payment system, has announced a new Zoompass Tag that,...